Hope is Thick in Honduras

“Hope is thick in Honduras,” as Honduran Mercy Associate Maritza Paredes describes in “Hope Has a Woman’s Face.” The narco-dictatorship has fallen—the fruit of over 12 years of courageous social movements protesting in the streets, risking repression from the Honduran military and police, and security forces that received U.S. assistance throughout. Many human rights and land defenders were martyred, including the beloved indigenous leader Berta Cáceres, and Afro-Honduran Garifuna leaders disappeared. While it will not be easy, given that death squads, corruption and drug cartels do not magically disappear, the inauguration of the new president, Xiomara Castro, on January 27 marked a new dawn.

The pre-inaugural program in the National Stadium in Tegucigalpa included the Garifuna, who danced, and a friend of Berta Cáceres’ singing a song of Berta. Xiomara is the first woman president, and one who identifies as a democratic socialist. The historic day felt like the inauguration of President Obama, the breakthrough of the first African-American U.S. president. 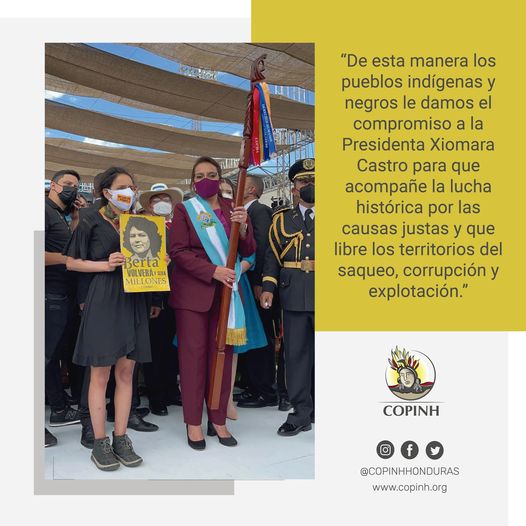 Xiomara’s inaugural address moved me to tears of joy as I watched online. She committed to policies that benefit the poor, challenging mining interests of the economic elite, and she called out: “Justice for Berta Cáceres” and “Freedom for the Guapinol water defenders,”who have been unjustly imprisoned for 28 months for nonviolent protests against a mining project. I was moved to see a delegation from the advocacy group SHARE in the National Stadium to give visibility to the Guapinol water defenders.

Perhaps most moving was at the end of the inauguration, the new president hugging Berta Cáceres’ daughter, who presented her with a wooden pole, the sacred symbol of the Lenca authorities and other indigenous peoples of Honduras. At the pole’s top is a woman guardian of the rivers that symbolizes the resistance of indigenous and Black women who care for Earth and who ensure respect for the rights of indigenous peoples historically plundered for their great natural wealth.

Vice President Kamala Harris was in attendance, and I’m sure she learned a lot.

Below is a poem I wrote about it all. It includes a reference to the painting around the whole National Stadium—of the many martyrs, including Berta Cáceres’ face. I arrived at Mercy’s Justice Team one month before the 2009 coup. A month after the coup, we took our first delegation down to touch the wounds and accompany our sisters, and we have been struggling since to change U.S. policy there—a root cause of migration. We’ll keep at it.